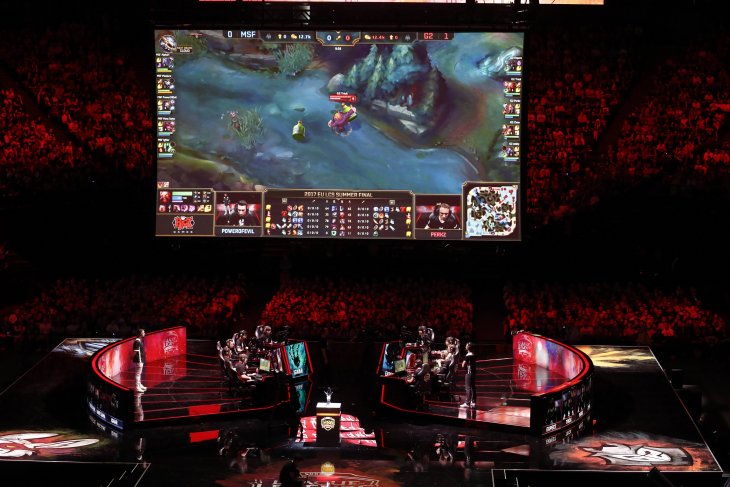 Esports on the Path to the 2024 Olympics

Esports is booming among the younger generation, and is growing into a billion-dollar market as part of digitization. A discussion at ISPO Academy Connect in Munich focused on the future of Esports at the Olympics, the entry of big clubs like FC Bayern Munich and Schalke 04, and the involvement of global companies like Mercedes. And why Esports is meant to finance a future transfer of Neymar.

FC Bayern Munich has just announced its entry into Esports, first with its basketball team. And Schalke 04 wants to finance world stars in its soccer department with a commitment to digital sports at some point. “Signing Neymar for Schalke – that’s the goal,” says Tim Reichert, Schalke’s Chief Gaming Officer, at the top-class Esports panel at ISPO Academy Connect with a wink. Sounds crazy at first – after all, Paris St. Germain paid 222 million euros plus for Neymar.

“Esports on the Way to the Top” – the title of the panel, brilliantly organized by soccer business students of Munich’s M21 campus, can only be emphasized in bold. Esports also offers huge opportunities for the sports industry as part of digitization. Christoph Rapp, International Sales & Retail Manager for Messe München, is convinced: “We want to play with new themes in the ISPO Academy. And Esports is definitely part of that.” The next big highlight on this path will be the ISPO Digitize Summit on June 28/29 in Munich.

In fact, such visions of the future (that is, that the Esports could make a Neymar transfer possible) could actually come true one day, if you look at the numbers of the fastest growing sport around the globe. According to Statista, global revenue from Esports was already around 550 million euros last year, and the billions sound barrier should be broken by 2020 at the latest. Of that, 130 million euros are set to be generated in Germany alone, as Deloitte predicts – a rapid growth from the 50 million euros from 2016. Large, traditional companies such as AOK, Wüstenrot, SAP, and Mercedes-Benz are already on board as sponsors.

The contract between the car brand and the German Football Association (DFB) is ending this year – investments are being made in Esports worldwide. This underlines a trend. The gaming community, estimated at around 1.7 billion people worldwide, predominantly young Millennials, is highly interesting for businesses.

Esports in the 2024 Olympics lineup?

Caroline Pilz, Head of Product Placement and Fashion Sponsorship at Mercedes-Benz, explains the reason why at the Esports summit in Munich: “Esports is an exciting, up-and-coming growth field. For example, we are transforming ourselves from an automotive manufacturer into a mobility provider, and this is exactly where we’re find our target group of the future worldwide.” No other sport combines future topics like digitization and internationalization without borders better while still offering entertainment.

The International Olympic Committee (IOC) also recognized the opportunities for growth in the midst of the crisis of the Olympic movement, and recognized Esports as a sport last November. In 2022, the Asian Games will be the first time medals will be awarded in video game competitions. Esports could at least be a demonstration sport at the 2024 Olympics in Paris – corresponding negotiations have just been confirmed by the International Esports Federation. However, IOC President Thomas Bach has made it clear in advance that there will be no place in the Olympic program for so-called “shooting games” – so the IOC does want to dictate the conditions.

But exactly that is what’s causing heated discussions in the self-confident industry. “Does Esports need the Olympics? Or isn’t it the other way around?” asks Michael Berchtold, CEO of the consulting company EsportsReputation, provocatively. Niklas Timmerman, Vice President of the German Esports interest group ESBD, goes even further: “There’s shooting in biathlon, too. Why should we give up our identity for the Olympics, which are on their way out? We want Esports at the Olympics on our terms, and not according to Mr. Bach’s tastes.”

Social responsibility in the industry – as all participants in the discussion emphasize – is a top priority. Gamers are one of the most undervalued target groups. Tim Reichert of Schalke 04 even believes that the “management of the future” will be recruited from today’s computer gamers.

That leaves the issue of violence in Esports: The most popular game worldwide, for example, is the fighting and strategy game “League of Legends,” with a market turnover of 2.1 billion dollars in 2017. The series finals were viewed by 75 million people, with the prize money totaling 24 million dollars.

The Esports department at Schalke 04 is also on its way here – but also with the soccer video game FIFA 18. Tim Latka, just 19 years old, is a true star of the scene. “He has 163,000 followers on YouTube – that’s more than our soccer players have,” Tim Reichert reveals. Bayern Munich wants to get in on Esports for the first time in the basketball sector. The name of the team founded just a few days ago: Bayern Ballers Gaming.

Esports in the coalition agreement

The entry of the soccer industry giants shows that Esports has arrived in the mainstream. The coalition agreement formulates the goal of recognizing Esports with “club and association law and supporting it in creating an Olympic perspective.” The German Olympic Sports Federation (DOSB) is currently working with 20 experts from sports associations, the games industry, education, law, science, and youth organizations on recommendations for dealing with Esports for organized sports in Germany.

With the media, the signs have long since already been green. The pioneer is ProSiebenSat.1 Sports GmbH, which has been presenting an Esports magazine to a growing audience of up to half a million people every week for the past two years, and has also been broadcasting live Esports events. “It’s an exciting topic that’s already on the road. It would be idiotic not to do it,” explains Chief Manager Stefan Zant at the discussion in Munich.