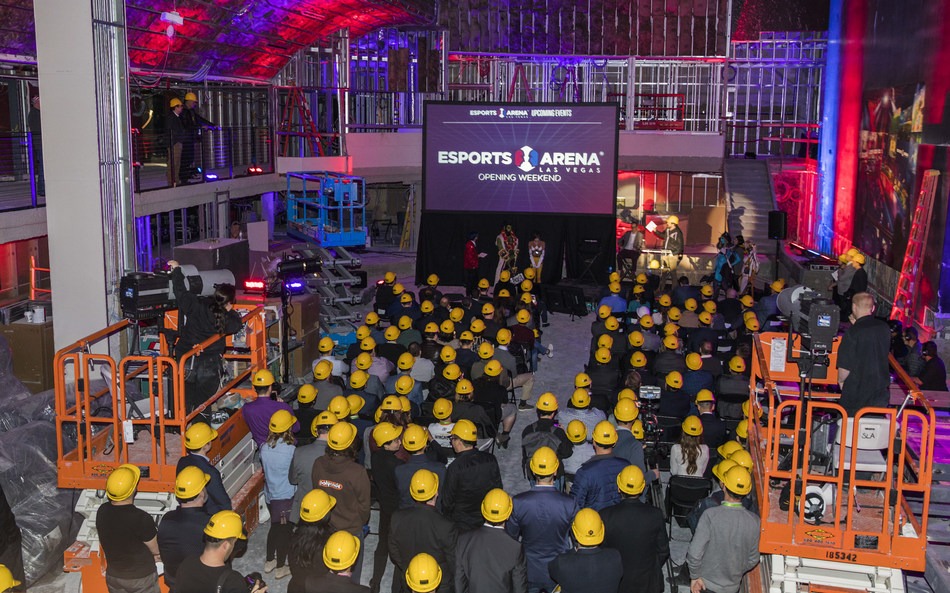 LAS VEGAS (January 11, 2018) – Allied Esports, the world’s leading network of dedicated esports properties and content production facilities, made a series of announcements last night during an event in Las Vegas, including the grand opening date and a major partnership for Esports Arena Las Vegas, and the first stop for its new mobile arena, Esports Arena Drive.

Esports Arena Las Vegas, The Strip’s first dedicated esports arena, will officially open its doors at Luxor Hotel and Casino onThursday, March 22 with a series of events, including an invitation-only, multi-day, live-streamed tournament. Additional details will be announced at a later date.

“Esports Arena Las Vegas is the cornerstone of our property, brand and content development and will allow us to engage esports communities, brands and stakeholders like never before,” said Jud Hannigan, CEO of Allied Esports. “With Las Vegas rapidly becoming a hub for esports, Esports Arena Las Vegas at Luxor will be the city’s home for competitive gaming and interactive entertainment.”

“We are proud to be chosen by and aligned with Allied Esports whose development of the Esports Arena Las Vegas further solidifies their leadership position in the massively growing competitive gaming space,” said Mark Aichele, Director of Hospitality & Broadcast Business Development for HARMAN Professional Solutions. “By exclusively bringing a HARMAN audio, video, lighting and controller solution to the Esports Arena, we will deliver a completely immersive experience to powerfully connect the fans to the games.”

In February, Esports Arena Drive will head to Daytona International Speedway with 704Games, the publisher of NASCAR Heat 2, for a multi-day tournament and fan activation at the Daytona 500. As one of the largest spectator events in the country, fans at the Daytona 500 will benefit from the truck’s production capabilities, and special appearances by industry celebrities and esports personalities will highlight the weekend.

“NASCAR Heat delivers gamers an authentic, fun NASCAR racing experience,” said Paul Brooks, CEO of 704Games. “Fans will be able to compete in multi-player racing in the DAYTONA 500 and Esports Arena Drive will bring this experience to life with an amazing first-class presentation.”

Allied Esports is a joint venture of some of the largest esports, mind sports, sports and entertainment companies – Ourgame International (SEHK: 6899) (owner of WPT Enterprises, Inc. and the World Poker Tour), KongZhong and iRena (NEEQ: 834358). The company’s mission is to build a global competitive esports property designed to connect players and fans via a network of integrated arenas and mobile esports trucks around the world that will serve as both battlegrounds and content generation hubs. The Allied Esports Property Network currently consists of Wangyu Esports in Beijing, Allied Esports SEG Arena in Shenzhen, Esports Arena in Santa Ana, Calif., the ELC Garage in Hamburg and the Big Betty and Esports Arena Drive mobile esports touring arenas with upcoming properties announced in Oakland, Calif. and Las Vegas. For more information, visitAlliedEsports.gg.

HARMAN (harman.com) designs and engineers connected products and solutions for automakers, consumers, and enterprises worldwide, including connected car systems, audio and visual products, enterprise automation solutions; and services supporting the Internet of Things. With leading brands including AKG®, Harman Kardon®, Infinity®, JBL®, Lexicon®, Mark Levinson® and Revel®, HARMAN is admired by audiophiles, musicians and the entertainment venues where they perform around the world. More than 50 million automobiles on the road today are equipped with HARMAN audio and connected car systems. Our software services power billions of mobile devices and systems that are connected, integrated and secure across all platforms, from work and home to car and mobile. HARMAN has a workforce of approximately 30,000 people across the Americas, Europe, and Asia. In March 2017, HARMAN became a wholly-owned subsidiary of Samsung Electronics Co., Ltd.