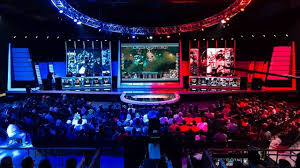 Esports on Cusp of Collegiate Takeover

As relevant as college football and basketball are to the world of college sports, esports, or electronic sports, is quickly becoming one of the most influential and relevant branches of college athletics.

In many facets, the scale and strength of college esports is already impressive, as Rolling Stone notes that the market as a whole, both professional and collegiate, generated nearly $700 million in revenue and an audience of almost 400 million people in 2017. These numbers cannot be attached to just any kind of fad or trend that is destined to die out, but they are telling of a brand that is bound to stick around.

The most popular video games involved in esports include League of Legends, Rocket League and FIFA, among others.

Its growth does not just lie on the consumer and revenue side, but also in the content and competition from colleges and universities. Dozens of colleges have started to support esports teams, with the Big East being one and the National Association of Collegiate esports having affiliation with more than 60 varsity esports programs as of this year.