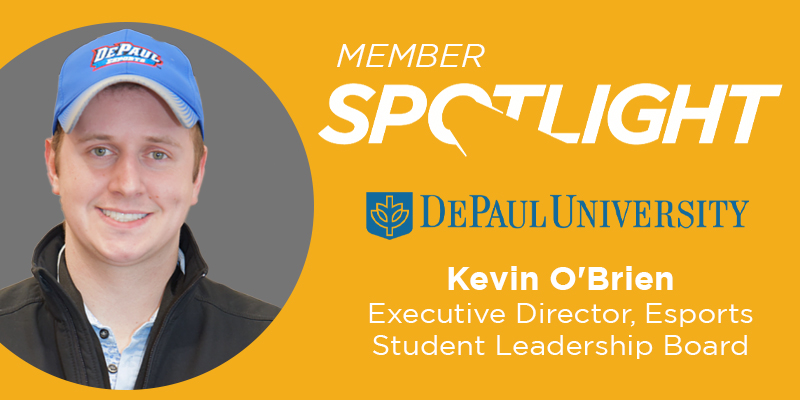 I have always loved gaming. When I was younger, I enjoyed playing Zelda, Mario Kart, and “GoldenEye 007” on Nintendo 64. As I grew up, playing competitive soccer became the focal point and my free time became limited. It wasn’t until three years ago that I decided to go to DePaul University’s Driehaus College of Business where I was able to find a passion I never knew existed within myself: esports.

I got started in the business of esports when I was conducting research into tech start-ups in the technology space. I kept noticing a theme within a lot of the newer tech start-ups and that was pulling their attention into the gaming sector and focusing on esports. I am in the honors finance program at DePaul University and a lot of my time is spent looking into earnings reports, which is something I love to do.

I remember the defining moment when I knew that I wanted to go into the esports industry as a career was this quote from Netflix in their January 2019 shareholder letter:

“We compete with (and lose to) ‘Fortnite’ more than HBO.”

While I could see a lot of the underlying trends in the gaming industry, Netflix stating this in their shareholder letter was the moment when I knew the esports industry is where I wanted to be.

Since you’ve started conducting esports research, what has been the biggest industry change or trend that you’ve seen?

There have been a couple of large industry changes or trends. The big trend I want to point out is the impact of the cord-cutting phenomenon and how it will help shape the esports landscape. The cord-cutting phenomenon was shown in Q4 2018 where cable TV lost 1.1 million subscribers in contrast to the positive gain just one year prior. This trend is going to continue

The younger generation is growing up with non-traditional forms of media, which is coming from emerging streaming services like Twitch, Netflix, YouTube, and others.

So, to really examine the esports industry, we must look at the next generation of gaming users. There are already 2.5 billion gamers across the world and that number is growing. The next generations growing up are raised watching Twitch, playing video games, and interacting in a whole new way. Gen Z has the ability to process technology in a way we have never been able to. They are easily able to work across 5 different digital screen mediums in a given moment. A smartphone, TV, laptop, desktop, and iPad/iPod. Generation Z understands technology whereas Millennials had to learn how to utilize technology. https://online.csp.edu/generation-z-in-the-workforce

With the new generation growing up more integrated into technology, playing video games, and watching non-traditional forms of media, we will see an extreme growth of the esports industry as a result.

What work have you done to promote esports, particularly to students?

I have been the Executive Director of the Esports Student Leadership Board for DePaul Esports for over a year now. My goal has been to help foster the next generation of student leaders in the esports industry. I am not an advocate for an esports degree for students, but I am an advocate for providing the tools for students to learn more about the esports industry and their respective majors. Those graduating with degrees in accounting, finance, marketing, communications, psychology, sports management, journalism, and other fields, can gain leverage in the workplace when they have knowledge on how to correlate their degree to their passion for esports.

Recently, I accepted a position at Tespa as a chapter coordinator on their community team. This is an amazing opportunity to learn from amazing leaders in the industry, but also to help spread my knowledge to others.

For me, it all starts with education and the next generation. The esports industry was built by gamers and then growth was fueled by investors and businesses. A huge piece that has been lacking is industry experts with knowledge in esports and their respective fields. We have colleges that are building esports programs, but there are far too many that are not grasping what that entails.

There are far too many colleges creating esports centers and that is it. While this is a great step in bringing together communities of competitive gamers, this isn’t enough. What collegiate esports athletes crave most is structure. They are balancing jobs, living on their own, taking a full load of classes, practicing video games and competing. That is a lot for any college student. Colleges should start looking at mirroring aspects of their athletics program for the students:

*Scholarships and stipends are in bold for a specific reason. Scholarships are a great way to bring in talent to ensure you remain a top competitive school. However, scholarships also are a great way to ensure you are building a sustainable program. Investing in esports talent for a college is two-fold: To ensure you have top talent, but it also functions as a marketing tool. The esports industry has the ability to reach younger people, who also are the next generation of college applicants.
The collegiate space is trending in a positive direction now that there is more available data about esports. We see professional esports organizations partnering with colleges, more brands sponsoring collegiate teams, and school administrations taking the plunge and building collegiate esports programs.

I imagine the state of the esports industry to resemble a lot of the traditional sports industry. The franchised model for esports will have worked out its kinks and the fanbases will become much bigger. Schools will create more of a pathway through education with esports, and there will be more transparency between companies in the space.