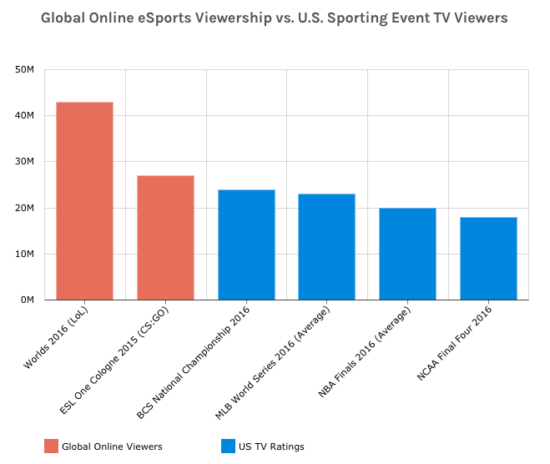 Has Esports Hit the Majors?

Esports is on track to be a $1.5 billion industry by 2020 as it emulates the business models of major league sports, complete with sponsorships, advertising, media rights, ticket sales and merchandise.

In arenas around the world, people are paying top dollar to see their favorite elite players and teams in action, while millions of global viewers watch from afar. These competitions have all the same elements of traditional sporting events with one nuance: Players connect passes and strike their opponents with handheld video game controllers, and rarely do they leave their chairs.

In 2017, esports attracted an audience of more than 380 million, a 20% increase from the year prior.

Old-school sports fans may roll their eyes, but esports—professional video gaming—is gaining traction as a spectator sport, garnering ticket sales, attracting major sponsorships and grabbing a growing share of advertising dollars. The segment is organizing around professional teams and leagues, many of them run by same high-profile owners of traditional major league sports.

Mainstream advertisers, from beverage companies to financial services companies, have come on as major sponsors and advertisers. The International Olympic Committee is even considering bringing esports to the Paris 2024 Summer Olympics.

In 2017, esports attracted an audience of more than 380 million, a 20% increase from the year prior. With a fan base that is young, affluent and global, esports is well positioned to win sponsorship and advertising dollars. Excluding game publisher revenues, the category was worth an estimated $700 million in 2017, and that figure is on track to increase about 32% a year over the next couple of years, reaching $1.5 billion by 2020 according to independent forecaster NewZoo.