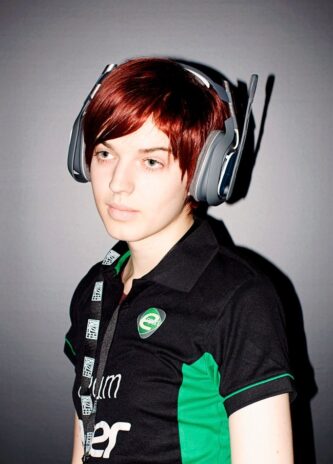 The Rise of the Professional Cyber Athlete

The economics of esports remain minor-league for all but a few lucky individuals. Players sign contracts with teams, which pay barista-like wages, in the sense that they are meant to be supplemented by tips for performance, or, in this case, by cash prizes. The odds of winning major tournaments are long, and many players also busk, by streaming their practice matches on Twitch and providing live commentary over their Webcams. Fans not only turn up in large enough numbers to generate advertising revenue (which Twitch shares with the talent) but sometimes donate cash. It’s an athletic—digitally athletic, anyway—Kickstarter campaign. The appeal is partly educational, a chance for mortal talents to learn the tricks of the trade (or for rival professionals to scout tendencies and tactics). It’s also interactive, offering an opportunity, via the chat window, for fans to communicate directly with their heroes. A few weeks ago, three hundred and twenty thousand people tuned in to watch a live stream of the Chinese Dota 2 star Zhang (Xiao8) Ning’s wedding.

Twitch streams also attract aspiring casters, envious of Day9’s celebrity. Like young Tim McCarvers showing up at the neighborhood ball field with a mic and an amp, they befriend some players, suggest a scrimmage, and send word that they’ll be narrating the action.

Streaming naturally encourages exhibitionism, whether in the form of comic hostility, coquettish vulnerability, or outright titillation. Professional gaming is about as sedentary and inexpressive as live entertainment gets, and yet here is an opportunity to flash some personality—or more.

Very nice write-up. I absolutely appreciate this site. Keep it up!